Could you live in a home that’s only 400 square feet?

Do you really need a place to live that’s 5,000 square feet or more? Of course you don’t, especially if it’s only you and your partner. My wife, Mindy and I have been married for almost 44 years and believe it or not, we’re still buddies. A tiny home will only work if you and your partner still like each other.

McComic, a Quinnipiac University law student, former intern with the city’s Economic Development Administration, and former pop-up cafe entrepreneur, is working with city Deputy Director of Zoning Jenna Montesano to figure out how best to amend the city’s zoning code to allow for the development of such “tiny houses” in New Haven.

The goal: To diversify the city’s housing stock and increase the supply of low-cost, low-rent lodgings citywide. 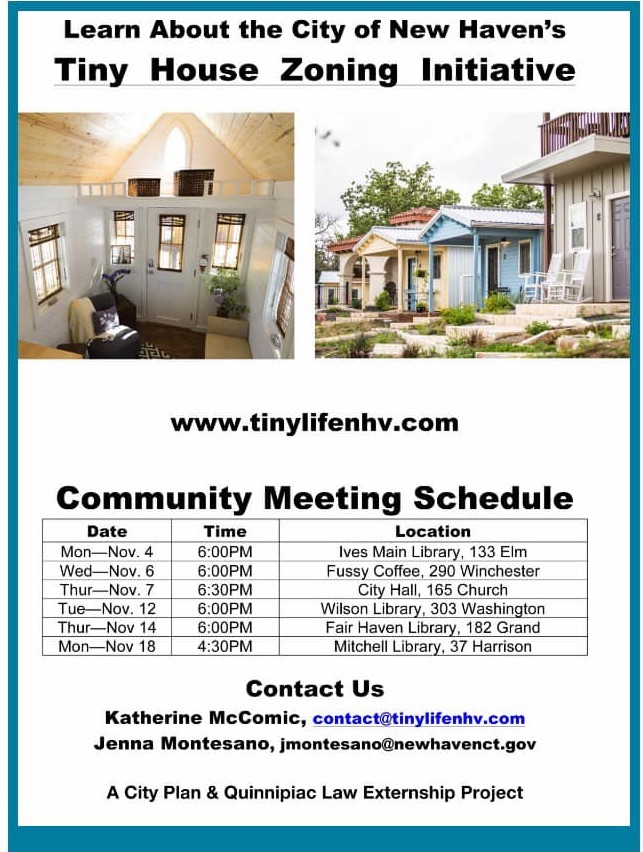 Tiny homes that have been constructed on wheels fall into the “Camp Trailer” category and are registered with the Department of Motor Vehicles.

“They’re not considered a structure, which is sort of the foundation of local land use regulation,” said John Guszkowski of the Connecticut Chapter of the American Planning Association. Guszkowski said that the flexibility of a tiny home on wheels can come with a catch. Where you can park it – and for how long – is not really clear; at least not yet.

Meanwhile, a tiny home on a foundation would fall under the same building codes as a typical residential home. The Office of the State Building Inspector told NBC Connecticut Investigates that the agency is in the process of adopting codes specific to tiny houses. The amendment to the residential building code would derived from Appendix Q of the 2018 International Residential Code. If approved, the new code requirements would be effective in October 2020, according to Joseph Cassidy, the Cassidy, the State Building Inspector.

A town’s zoning rules would have to allow for a tiny home to be built in the first place.

“Every town in Connecticut, all 169 municipalities, do it differently,” said Guszkowski. Step one, he said, would be to go to the municipal planning and zoning offices in the town in question.

At the Connecticut Realtors Association, some believe tiny homes could help with our state’s lack of affordable housing. They say it is time for cities and towns to look at writing the rules so the state can be a part of a trend already taking off in other parts of the country.

“Connecticut does not have the zoning to accommodate this and they need to start considering that,” said Joel Grossman of the Connecticut Realtors Association.

Reviving cities must include the excluded Sept 19th, 2019

That has changed. With 1,500 new apartments completed or in construction, a new UConn branch, new transportation options and minor league baseball, the downtown area is coming back to life.

Former industrial cities that were thought dead have risen like Lazarus, drawing young people, small businesses and trendy amenities. But the revivals of Baltimore, Cleveland, Pittsburgh and (even) Detroit, as with Hartford and New Haven, have been uneven within their boundaries. Some downtown districts thrive; many other neighborhoods, almost invariably poor, minority enclaves, are left behind.

Werner and his team have been campaigning for years to secure a parcel of land in Park City where they can build a community of tiny houses which he hopes will kickstart interest in city and state officials looking to deal with need-based housing demands.

“The biggest problem in Connecticut is that the exclusionary zoning that we have engaged in in many towns over the last (several) years with big lots and big houses … has caused us to not consider alternative means of housing,” said valley land use attorney Dominick Thomas.

Husband and wife team Ken and Tori Pond were in the contracting business when the downsizing craze first started. Their company, Craft & Sprout, is currently working on a tiny home that has a fully functioning bathroom with hot water, full kitchen amenities and the comforts one would expect from a modern home. The 300-square foot home is on a set of wheels and ready to head to the Catskills next week.

“It really puts things in perspective for a lot of people of what’s important to them,” says Tori Pond.

The Ponds say they design their houses to the customers’ specifications. The homes are all on four wheels for the convenience of a mobile home, with the look of a house.

Rosenblatt, a co-founder of the HartBeat Ensemble theater group in Hartford, Connecticut, had a wide circle of friends and acquaintances in local activist communities. The year was 2003, the United States had launched a war in Iraq, and the post-9/11 environment was making her think differently about what kind of life she was going to have for herself and her family. An initial group of about 20 people liked the idea of creating an intentional community: living together with a shared set of goals and values to have a life that would be more meaningful, less harmful to other communities and the environment—and more affordable.

Shirlene Stoven, 81, organized her fellow senior housing residents in the Applewood mobile home park in Midvale, Utah, and formed Applewood Homeowners Cooperative. They fended off developers and were able to work with the city and nonprofits to buy the land their homes sit on.

The spread of videos and TV shows like “Tiny House Nation” and “Tiny House, Big Living,” though, shows that the movement has tapped a desire among Americans to try to downsize and live more simply.

Yet despite the lower cost, small carbon footprint, and potential for DIY construction, cities and communities have been slow to change their zoning codes to allow tiny homes as infill development or transitional or emergency housing. Most cities, for example, make it illegal to live in a vehicle outside an RV park.

t’s what the Trumbull resident and his partners have been seeking support for from local and state officials as he spreads the idea of using tiny homes to solve the plethora of housing issues facing the city and state. In addition to Bridgeport, Danbury, Norwalk, Stamford and even Greenwich have each dealt with affordable housing shortages.

Tiny House Co. stands to fall into that role indirectly as Werner and partner Rashell Davis continue to seek support and seek funding from the city and state.

U.S. Rep. Jim Himes, D-5, recently took a tour of the company’s facility to express his support for the company and its potential impact on all of southwestern Connecticut.